Kenya's Great Rift Valley.
(3)
Log in to rate this flight plan
Recommended Aircraft
Cessna 208B Caravan, Mooney, Bonanza, and Baron
Flight Summary
Today we shall fly over the Kenyan part of the huge East African Great Rift Valley.
3h 30m
Uploaded By: FlightSimToday on YouTube
Flight Rules: VFR
Stops: 5
Downloads: 539
How do I use this file?

Today we shall fly over the Kenyan part of the huge East African Great Rift Valley. We depart from Nairobi's Wilson Airport [HKNW], the busy "working" airport of the region. We almost immediately pass over Karen Blixen's farm [BLIXEN] (now a museum celebrating her Out of Africa). Next, we see the double volcanic crater of Mount Suswa [SUSWA] and then pass over Hell's Gate National Park [HGATE]. Note the two extinct volcanos and the Olkaria Geothermal Stations. (The park, including Pride Rock and the Gorge, served as a model for the 1994 film The Lion King.) We land at Naivasha [HKNV], a large town whose main industry is now floriculture (you can see the vast arrays of greenhouses). On the lakeshore is the colonial Naivasha Country Club [LNCC], now a luxury hotel, which in the 1930s served as an intermediate stop for Imperial Airways' flying boat service from Durban to London.

Heading northwest, we fly over Lake Nakuru [NAKURU], the famous soda (alkaline) lake whose dense algae attract a population of a million flamingos – and turn them pink. (In 2013 the birds left for Lake Bogoria but in 2020 they returned to Lake Nakuru.) We pass over the childhood home of Beryl Markham [BMARK] (aviatrix and author) and then land on the neat grass strip of the international private St. Andrews School Turi [HKQM].

Then flying north, we approach the western edge of the Rift to land at Kabarnet [HKTG], the home of long-time president Daniel Moi and today a center for the sometimes-violent Kenyan politics. The airstrip lies just north of town in the Tugen Hills (in which paleontologists have made numerous discoveries). Views to the west, over the rich Kerio Valley, provide a sense of the long dramatic Elgeyo escarpment which towers 5,000 feet over the valley floor. These Kenyan highlands, including the Eldoret area and the Tugen Hills and especially Iten, are home to many World and Olympic long-distance champions.

On departure, we scale the ridge of the Tugen Hills and then descend to execute a low pass over the Lake Baringo north shore near Loruk [BARINGO]. We want to inspect the rising waters of the lake that are threatening the fishing dependent communities on its shores. Proceeding to the northeast, we pass over the wide Rift Valley to climb over the northern reaches of the Lakipia Escarpment. The country turns dry and we land at the small remote settlement at Barsaloi [HKOJ]. This is Samburu country whose native peoples continue to practice a semi-nomadic pastoral life. Cattle are the currency of success in this very traditional social order that is changing only very slowly.

A quick jaunt north lies the larger Samburu town Baragoi [HKSY]. It was from here that in 2012 about 40 national police officers traveled west into the bleak Suguta Valley to impose order over cattle rustlers. The paramilitary police were lured into an ambush and almost all were massacred. (The national government has provided arms to local Turkana and Samburu tribal communities and asked that they maintain order. This plan is not working well.)

We head west over the dry ground to crest the Losiolo escarpment and descend into the Suguta Valley [SUGUTA]. (The valley floor is about 1,000ft.) This is breathtaking desert scenery. The surreal landscape of lava, sand, and dried mud is broken only by occasional volcanic cinder cones and geological features to the east and west that rise to elevations of 3300 feet. The Barrier Volcano to the north provides a natural break between the valley and Lake Turkana. At that northern edge lies the seasonal Lake Logipi whose alkaline shallow water can attract flamingos.

We travel north onto Lake Turkana, the world's largest desert lake. The green-blue jade color of the water is created by the presence of algae. The waters contain 40 species of fish and the shores provide sunbathing beaches for Nile crocodiles. (At one time, this was the home to the world's largest concentration of Nile crocodiles.) The indigenous people continue a partly-pastoral lifestyle although increasingly they are turning to fishing as a way to support their populations. The ecological value of the area, as well as the number of truly significant paleoanthropological discoveries, have led to a UNESCO World Heritage Site designation.

We end our trip at remote Loiyangalani [HKLY]. This small village subsists on fishing and gold panning. It also caters to a small tourist trade with a few lodges near the airstrip. (This was the setting for the tragic finale in John le Carré's novel The Constant Gardener.) 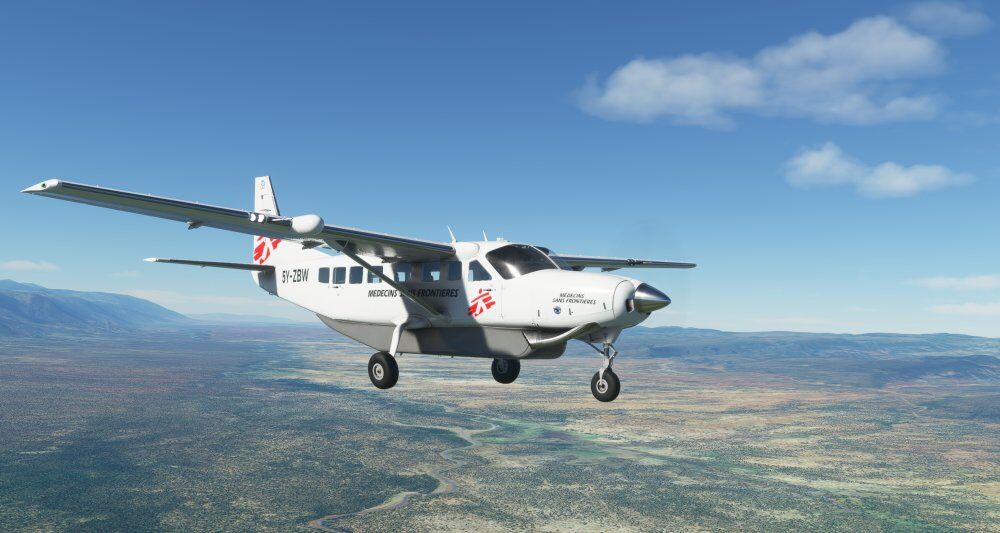